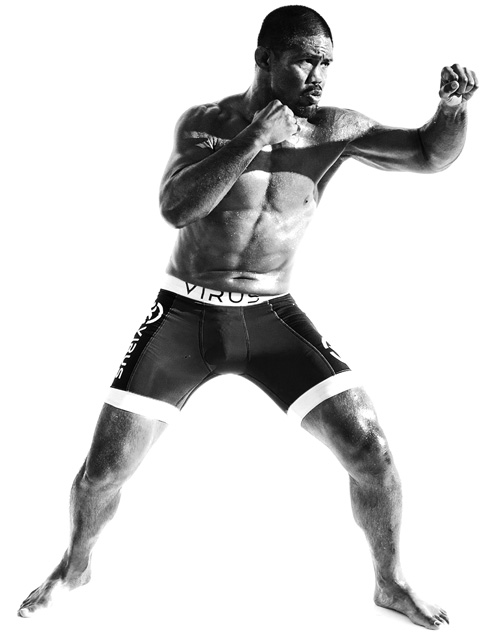 Mark Muñoz is a UFC Middleweight, NCAA Division I wrestling Champion, and owner of one of the top MMA gyms around (Reign Training Center) in Lake Forest California.

Mark and Team Muñoz approached Giographix to help develop their brand – one that needed to appeal to a very broad, but impassioned audience.

We understood and took the challenge head on. We had to create a mark that would resonate with hardcore MMA fanatics, Mark’s considerable Filipino fan-base and even casual fans of the fastest growing sport in the world.

Creating our first MMA-themed logo was a challenge. What we had was a fighter who already had a strong following and one of the more memorable nicknames around. It was apparent that we had to incorporate a number of items to help represent Mark’s Filipino heritage and the warrior spirit that embodies today’s MMA fighters.

Incorporating the sun was a no-brainer. Adding the coat of arms tied in two things–the fighting spirit and Mark’s heritage.

Working in the letter “M” proved to be a little bit more difficult until we started playing around with the sharpness of the angle the middle point creates. Once we formed the “M” out of the coat of arms shape, the logo really started to come together.

As part of our partnership with Team Munoz, the team behind the Filipino Wrecking Machine, we created T-Shirts, posters and other marketing materials that aimed to have as much impact as Mark’s right hand.

We worked on various posters, flyers, sponsorship decks, stickers, various ads and much more. The first poster was a collage of imagery that Mark’s name was inspired from. The Philippine Sun in the background with a UFC cage and a wrecking site. There is also a wrecking ball that smashes through the name.

The sticker design (which was also used in a shirt/track jacket design) was a tribal-based pattern from old Filipino warrior tattoos. That design ended up being one of the more popular shirts sold in Mark’s inventory.

We worked closely with Mark & Team Muñoz to develop the look of the Team Muñoz Brand apparel. The needed to extend the branding we had established and continue to push it even further in to t-shirts, hoodies, track jackets, and even custom snapback hats.

We were able to get pretty creative with the t-shirt designs. We understood that the market was saturated with uber-aggressive chains and distressed gothic fonts but that isn’t what Mark was about. We wanted to continue to incorporate what we had started with the logo- a mix of MMA elements with Filipino ties and adding our own touch to the design. The shirts were sold online on Mark’s website, his gym, and on location during his various worldwide MMA/wrestling seminars. We also created a design that was used in a nationwide-campaign in the Philippines in a partnership with the country’s largest television network, ABS-CBN during one of Mark’s UFC promotional tours in the Philippines.

The snapback hat was another challenge. We sought out a manufacturer that could produce a high quality product based on our specifications. The design featured the Team Muñoz logo embroidered in gold with a white front section and navy back. The red brim featured an embroidered cage fence pattern that mimics the octagon. 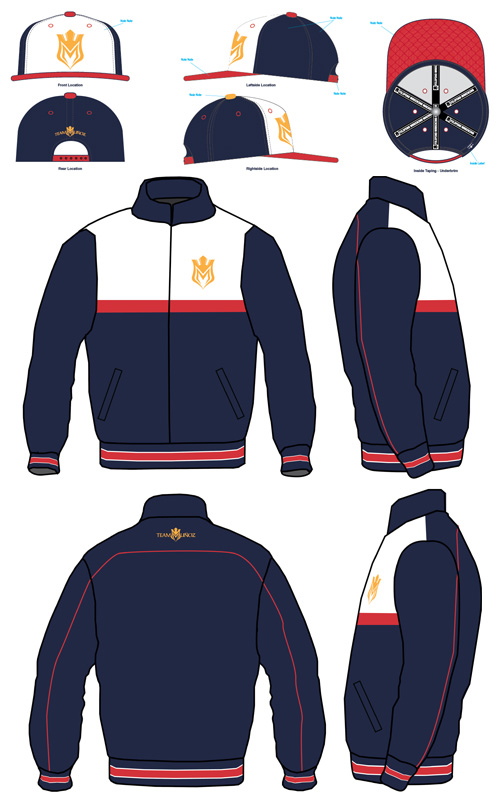 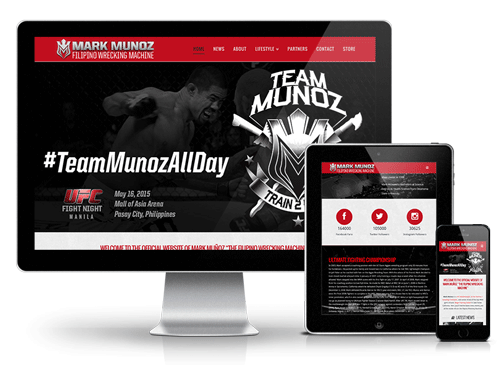 When Mark needed to update his online presence, he turned to Giographix to help redesign his website and challenged us to make his site not only look more professional, but easier to navigate and update.
Mark and Team Muñoz also needed to easily share their content and increase engagement with his fans and followers so having a responsive website was essential during the redesign. The smartphone and tablet optimized site also boasts an e-commerce store that sells the latest in Team Muñoz gear (also designed by Giographix).
0
ARE YOU READY TO GET STARTED? Yes, Let's do this.